I’ve recently decided it would be a good idea to write down some of the things I’ve been reading and learning over the past couple of months. What better place to do that than here? So with this post I am going to present short reviews of four books I’ve read recently: Outliers by Malcolm Gladwell, So You’ve Been Publicly Shamed by Jon Rohnson, Creativity, Inc. by Ed Catmull, and Getting Naked by Patrick Lencioni. 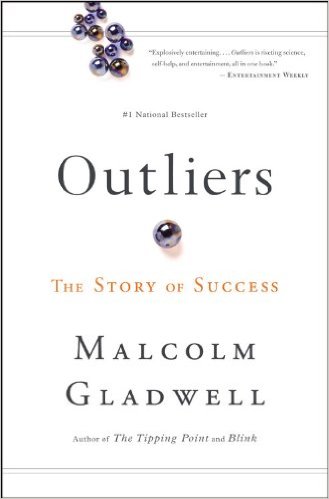 I may be the last person to have read Outliers and it certainly lives up to both it’s praise and criticism. Gladwell is an exceptionally talented writer with a gift for making the complex seem simple, maybe even too simple. I enjoyed every moment of Outliers, drawn along by the narrative and intellectual surprises (even when they were less “surprises” and more well-crafted revelations of common knowledge).

I accept his premise that success requires hard work and a good deal of luck (I presume most would). The specifics of his argument regarding “accumulative advantage” are, however, much more disturbing. It may be because I want to find any way I can to discount his uncomfortable observations, but I find Paul McCartney’s reflection on the book rings true. In a 2010 interview he said,

”I’ve read the book. I think there is a lot of truth in it … I mean there were an awful lot of bands that were out in Hamburg who put in 10,000 hours and didn’t make it, so it’s not a cast-iron theory. I think, however, when you look at a group who has been successful… I think you always will find that amount of work in the background. But I don’t think it’s a rule that if you do that amount of work, you’re going to be as successful as the Beatles.”

While reading about Gladwell’s 10,000-hour rule I couldn’t help but hear Macklemore’s catchy anthem running through my head. In rapping about Escher, Basquiat, and Keith Harring he declares, “The greats weren’t great because at birth they could paint. The greats were great because they paint a lot.” This is certainly the most optimistic take on Gladwell’s message.

I think the take away presented by Gladwell himself at the end of the book may be a more apt summary, “Outliers wasn’t intended as autobiography. But you could read it as an extended apology for my success.”

If that’s true, he certainly has a lot to apologies for. It’s clear to me why so many business writers aspire to reach the quality and tenor of his writing.

So You've Been Publicly Shamed 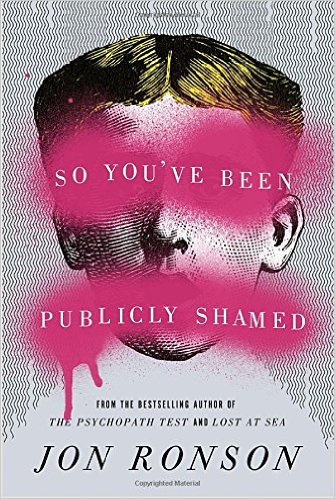 David Leibow, M.D., a member of the psychiatric faculty at Columbia University writing about shame in Phycology Today says it is not only “one of the biggest causes of emotional problems” but “also one of the biggest impediments to dealing with them.” Unfortunately, Jon Rohnson did not introduce me to this quote—I instead discovered it in my own research after reading his book.

While I found the concept of Rohnson’s book compelling—that the internet is providing a powerful evolutionary accelerant to one of the most infectious and destructive human emotions—I did not find his argument well structured or supported. His rambling account is short on research and long on anecdote, relying heavily on a few high-profile cases of public shaming.

I would have been interested to learn more about the conversation within anthropological circles about the dividing lines between shame, guilt, and embarrassment. By ignoring the moments when these powerful emotions serve a positive purpose I believe he undermines his otherwise important point. We should consider carefully the cultural change underway as a result of the increasing speed of communication.

Shame’s power is undeniable, the internet’s ability to accelerate it is an important trend, but then how should we react as individuals and a culture? What can we do to prevent a pandemic of shame? Rohnson’s answer is an exceptionally short (and hamfisted) list of anecdotally-founded responses.

While sometimes crude I did enjoy Rohnson’s storytelling and humor. Stories of the shamed are of course unfortunately compelling. I just wish the book provided a stronger model for understanding and responding to public shaming. In part so I felt less like one-more-rubbernecker and mostly because it could have been so much more powerful—maybe even transformative. 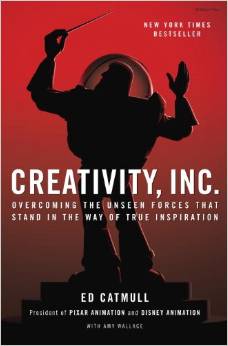 I haven’t read a book in years that seemed more honest, clear, and applicable to my work than Ed Catmull’s Creativity, Inc. I found his storytelling compelling (as should be expected from the CEO of Pixar) and his insights deep, balanced, and trustworthy. He confirmed some of my ideas about building creative teams, and challenged many others, with a humility and quiet strength that made it easy to understand how he has risen to lead a new golden age of animation.

While Catmull draws all his examples from his time leading Pixar and now Disney Animation this is not a book about cartoons (as his partner in this adventure, Brad Bird, still calls them without a hint of derision). This is instead, exactly as the introduction claims: a book for “for anyone who wants to work in an environment that fosters creativity and problem solving.” Each lesson Catmull draws from his wealth of experience is clearly communicated to be understood abstractly and transferred to nearly any industry. I found it especially easy to transfer to design and technology consulting.

The Brain Trust, Catmull’s specific thoughts on what he calls “postmortems” and we might call “retrospectives”, Notes Days, and many other ideas are so immediately applicable I found myself ending chapter after chapter thinking, “Hmm, so how could I implement that idea tomorrow?” And there are many we will try.

He also explores a number of more heady ideas such as his thoughts on “Change and Randomness” where he discusses the effects of “stochastic self-similarity” on the way we consider and solve organizational problems. But even as he ventures into complex concepts he has an admirable way of making them approachable. As he writes, “When we put setbacks into two buckets—the ‘business as usual’ bucket and the ‘holy cow’ bucket—and use a different mindset for each, we are signing up for trouble.” because as he explains, “big and small problems … are, in fact, self-similar.”

In another example the concepts behind enactivism (and to a lesser degree embodied cognition) are presented in his chapter on “The Hidden”. In it Catmull argues that “our mental models aren’t reality”, although we are all to prone to treat them as such. Confirmation bias among other phenomenon are actively fighting our ability to see that the “perceptions and experiences of others are vastly different than our own.” and celebrate that “in a creative environment, those differences can be assets.”

A book that is simultaneously entertaining, highly practical, and deeply thoughtful is a rare gem indeed. The highest praise I can give a book is this: that I knew the moment I set it down I would be picking it up again soon to read once more. Creativity, Inc. easily made it on to that list. 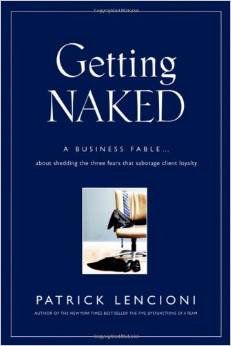 This book was recommended to me by a friend who said he thought it would be highly applicable to my work as a consultant. I must admit the first few pages of Getting Naked left me wondering if I would finish it. It begins with such a pile of hippy-dippy mumbo-jumbo that I wondered how it could have been recommended in the first place. Thankfully it takes a sharp turn once the Lencioni begins to tell his “fable”.

The story itself was fast-paced and well-written. I found myself fully engaged with the story and wondering what would happen next. I laughed out loud a number of times and even surprised myself when I found I was sufficiently invested in the characters to feel sad when two of them decide to leave their posts at the end of the book. While the storytelling was compelling it was clear to me throughout that this is in fact a “fable”: a fictional tale conceived in order to present a moralistic message.

It’s an interesting device but it ultimately undermined my trust in the conclusions Lencioni draws. The unfortunate part is I suspect Lencioni has a compelling story to share about running his own successful firm. One that would lend much more credibility to the three fears and twelve principles he lays out in the book.

Despite my incredulity I found the vast majority of the conclusions Lencioni draws rung true with some being downright insightful. He admonishes readers to abandon the fear of losing a deal (or indeed the business), the fear of being embarrassed, and the fear of being inferior. He outlines a set of principles throughout the story which he then reiterates with more clarity at the end of the book (so put away your notes and enjoy the story first).

There was really only one principle I had deep misgivings about. Lencioni suggests that consultants should “give away the business” and in fact reduce fees if asked by a client. I have a feeling too much time in the field of management consulting has left Mr. Lencioni with a skewed view of the margins enjoyed in most service businesses. While I agree that giving in order to receive is a powerful sales tool (and many of his suggestions about how to do this are fine) I would stop short of discounting rates.

Lencioni is clearly a talented writer with interesting things to say about the business of consulting. I wish, however, he would have founded his advice on stories from his own real-world experience. I say this while I acknowledge that client-confidentiality may very well have prevented it. With that in mind I am glad he shared his observations—it is better to have read them in this form than not at all.